A less intuitive example of what’s possible can be found in the auto insurance industry. This industry has a few peculiarities about it. First, firms tend to lose money on the provision of insurance. That is, firms tend to pay out more in claims than they bring in through premiums. How do they survive? Because customers pay in advance and the investment gains from prepaid premiums cover the loss and provide a small profit. Thus, an innovation we’d be unlikely to see in this industry is that customers no longer have to pay in advance—the prepay arrangement is what’s funding the whole thing. A second interesting observation about this industry is just how price-sensitive it is. If one insurance company is even a few dollars cheaper than another, customers tend to flock to it.

With these constraints in mind, consider Progressive Insurance, a company that spends more on service than other firms, yet its customers don’t pay extra for it. How is this possible? Because the service improvements reduce costs dramatically, which more than covers the expense of providing the additional service.

When a Progressive client has an auto accident, the company deploys an immediate-response van to assist the client in distress, often arriving on the scene before the police or tow trucks. A clean, crisp Progressive employee comes to save the day, dusts off the customer, and asks all the right emotionally intelligent questions. The empathetic employee then assesses the damage and often cuts the customer a check on the spot, not days or weeks after the accident.

To be clear, this is not inexpensive. The branded, four-wheel-drive trucks; the wireless technology to know how much to settle the claim for; the managing of three shifts of claims adjusters because customers don’t get into accidents along the traditional work hours of nine to five—all of it costs real money.

How can Progressive afford it in such a price-sensitive industry? Just like Celebrity Cruises passengers, Progressive customers love the service but are unlikely to pay more for it. But immediate-response vans aren’t gratuitous service. It turns out that the insurance industry is ripe with fraud, and a clever way to combat fraud is to show up at the scene of an accident and observe firsthand what actually happened. Internally, Progressive has been known to refer to its trucks as fraud-busters, and they do exactly what the name suggests.

Progressive’s on-site service model has other cost advantages, too. The insurance industry is also rife with legal claims, but Progressive learned that if an adjuster arrives at the scene of an accident and asks the customer, “Are you OK?” then that customer is much less likely to involve a lawyer. The experience has the effect of humanizing the insurance company and diffusing a customer’s anger, which makes Progressive less of a target. By simply caring enough to ask, Progressive reduces its clients’ interest in suing.

Fraud, disputed claims, and legal fees represent $15 out of every $100 in insurance premiums across the industry. But when a claims adjuster shows up within minutes with a sharp eye and an open heart, both fraud and legal costs tumble. By drastically lowering these operating costs, Progressive’s excellence more than pays for itself.

The kind of innovation represented by Progressive’s immediate-response vans requires a specific sequence. Progressive started out by targeting its biggest buckets of cost—fraud, disputed claims, and legal fees—and then worked out from there to find ways to dress up the cost savings as value-added service. This is the secret to the second funding mechanism: sequence matters. Start with costs.

Progressive has continued to innovate in ways like this. Another unwieldy cost category for the auto insurance industry has been reimbursements to independent auto repair shops. These shops delivered uneven quality for a wide range of prices, and insurers felt helpless in maintaining control over them. So Progressive began to coordinate the activities among a much smaller group of repair shops, where experience and scale could be leveraged—and improved the customer experience along the way. Progressive now offers customers an optional concierge level of claims service in which it will arrange for the customers’ cars to be repaired after an accident. This removes a great deal of hassle for customers, who would typically have to find a repair shop, navigate the reimbursement policy, and hope they get decent value for the money they’re spending. Progressive handles all of these steps for the customer, saving them time and anxiety. And the company does it all without charging anything extra, because of the savings generated by using a smaller set of repair shops with which Progressive has built reliable relationships. These savings more than pay for the added value to the customer.

One way that Progressive has continued to innovate is by defining the concept of service improvements broadly. In this brutally price-sensitive industry, Progressive now provides customers with a comparison quote, a helpful quote for its service alongside the quotes for all its major competitors. Now customers don’t need to waste their time shopping around—Progressive does it for them. And when Progressive’s quote isn’t the lowest, customers go to the competition.

At first glance, this seems like an unusual thing to do, particularly since Progressive is the lowest only about half the time, thus funneling inquiries to its competitors at a healthy clip. But the insurer is using the comparison quote as a way to select customers.

Progressive is widely considered one of the industry’s best at the underlying analytics of insurance. It invested in this advantage at its inception, when it exclusively served high-risk drivers, a diverse segment it believed was being inappropriately priced by the market. These customers require superior analysis to price effectively, and Progressive became very good at it, very quickly. While Progressive continued to benefit from its superior assessments—in evaluating any customer, not just the high-risk ones—it finally really monetized this advantage when it created the comparison quote.

Consider following figure, where the true riskiness of a customer is represented by the vertical axis, and the premium charged by Progressive’s competitors is represented by the horizontal axis. If the competition were perfect at pricing risk—something that is certainly not true—then the customers on this graph would be lined up on a forty-five-degree angle. 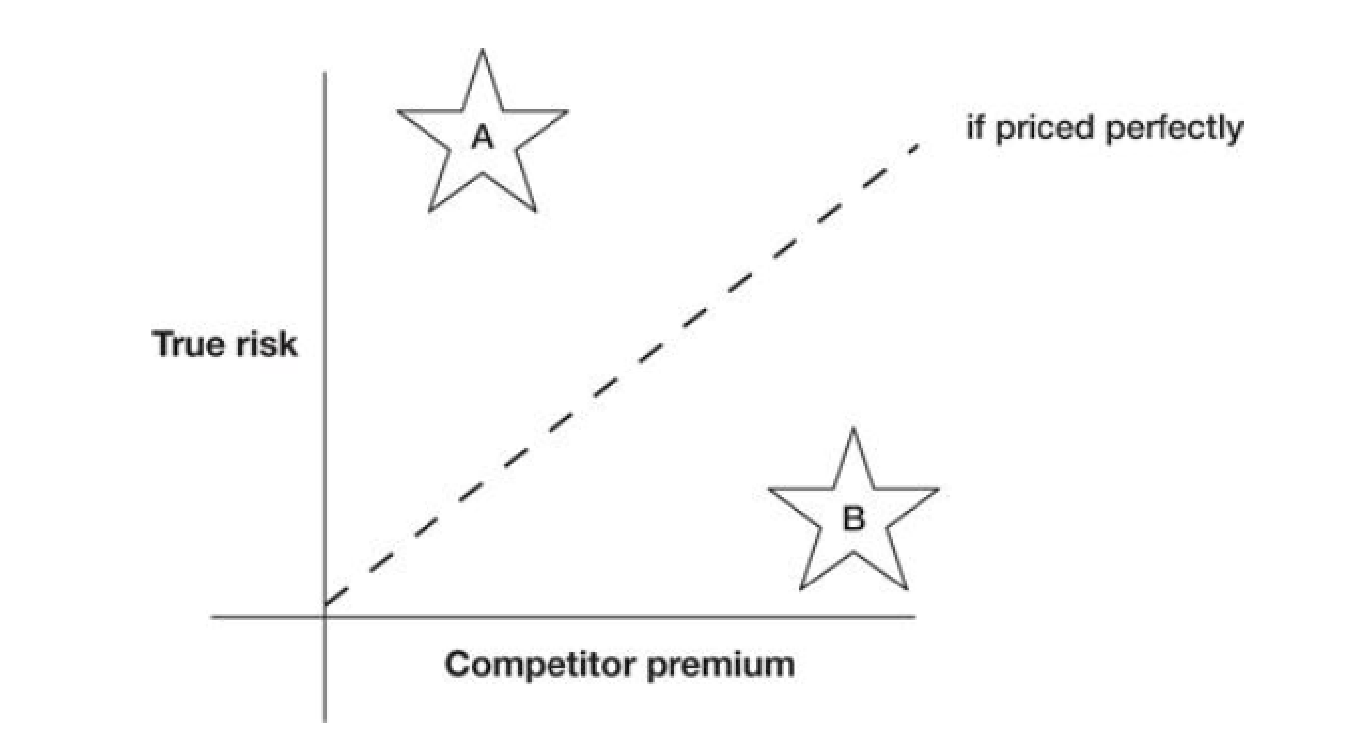 With this backdrop, consider two customers calling Progressive for a comparison quote. Customer A calls—someone who represents high risk and whom the competition is undercharging. Progressive gives A its own quote and quotes for its nearest competitors. Since Progressive will not be the lowest quote, A will choose the competition. This is a positive outcome for Progressive, as it contributes to its competitors’ losing money on insurance. It’s a different story for customer B, a low-risk customer whom the competition is essentially overcharging. In this case, Progressive will be the lowest price, acquire the customer, and still make a profit. The comparison quote lets Progressive select its target customers—in a format that is widely valued by the industry’s price-sensitive customers. Again, note the value of this latest innovation: while Progressive was always better at risk assessment, not until it put some teeth into its value proposition—until it built a service offering on top of that proposition—did the company fully realize the benefit of its operational strengths.

← PreviousThe Fury Over Airlines Fees
Next →Avoiding the Curse of Free Riders: Gateway versus Amazon