Substory: Making Of A Genius: What’s Common Among Most Great Innovators?

Psychologists speak of a quality called “grit,” an attribute related to perseverance and stubbornness, but also to passion, all characteristics we’ve seen much of in these pages. Defined as “the disposition to pursue long-term goals with sustained interest and effort over time,” they, not surprisingly, have found grit related to success in everything from marriage to the Army’s Special Operations Forces. Perhaps that’s why so many of the characters we’ve met thus far in our story were headstrong, even arrogant. Most great innovators are. They have to be.

Our next pioneer, Dmitri Mendeleev (1834–1907), a Russian chemist known for his tantrums and fits of rage (and for having his hair and beard trimmed just once each year), fits comfortably in that pantheon of stubborn mules. So strong was his personality, in fact, that his wife eventually learned to avoid him by living at their country estate—except when he showed up there, at which time she’d grab the kids and move to their city residence.

Mendeleev, like Hawking, was a survivor. In his late teens, he was hospitalized for tuberculosis, but he not only survived—he found a nearby laboratory and spent his days of recuperation performing chemistry experiments there. Later, after obtaining his teaching credential, he angered an official at the Ministry of Education and as a result was assigned to teach at a high school in faraway Crimea. The year was 1855, and when Mendeleev arrived, he found that not only was the high school in a war zone, but it had long ago been closed. Undeterred, he returned home, gave up on his prospects of a high school teaching career, and took a job as a privatdozent—one who lectures for tips—at the University of St. Petersburg. He eventually became a professor there. 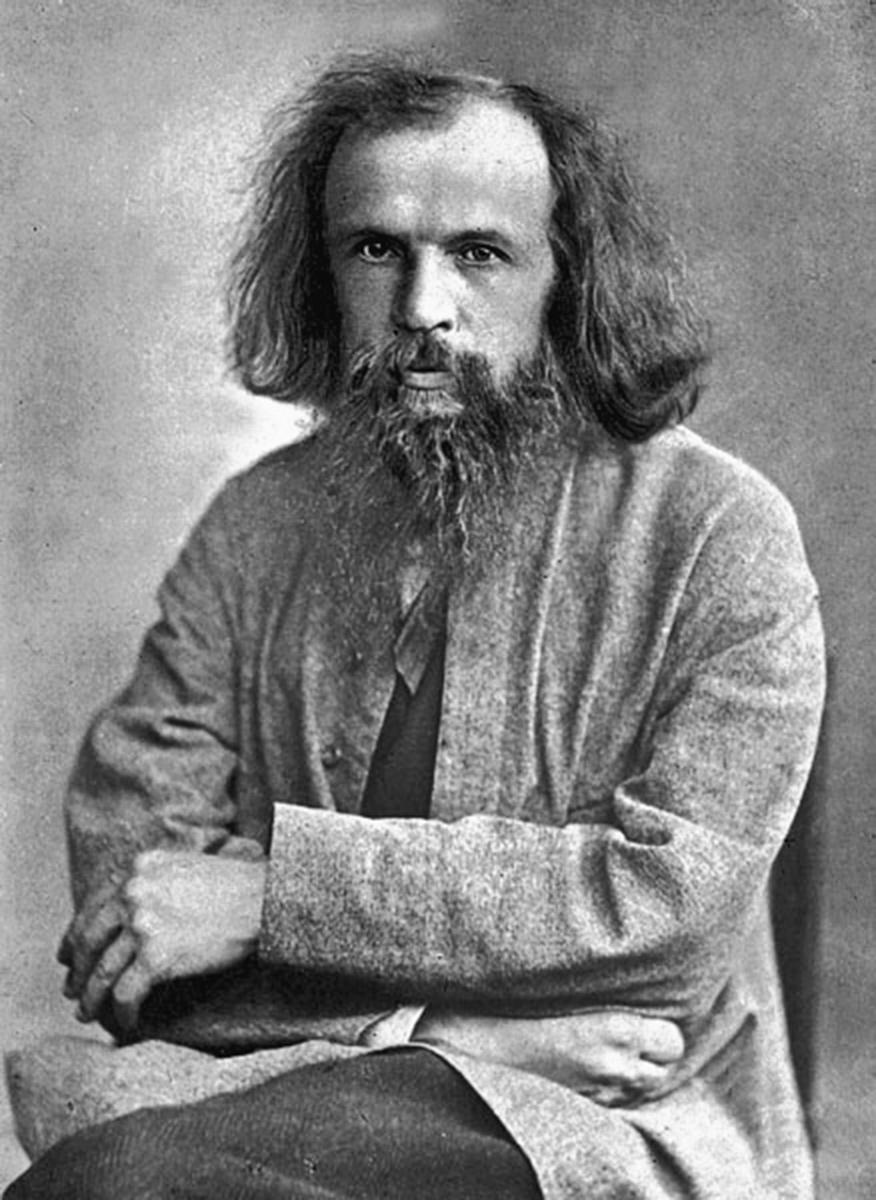 That Mendeleev was a chemist, or even educated at all, he owed entirely to his mother. He was born to a poor family in western Siberia, the youngest of either fourteen or seventeen children—accounts vary. He did poorly in school but enjoyed performing makeshift science experiments. His mother believed in his intellect, and when he was fifteen, after his father died, she set off on the road with him, looking for a university that would take him.

It proved to be a journey of fourteen hundred miles, involving much hitchhiking on horse-drawn wagons, but in the end he got a small scholarship at the Central Pedagogical Institute, in St. Petersburg, where the director was an old friend of his late father. His mother died soon afterward. Thirty-seven years later, he dedicated a scientific treatise to her memory, quoting what he called her “sacred” dying words: “Refrain from illusions, insist on work and not on words. Patiently seek divine and scientific truth.” Mendeleev, like so many great scientists before him, would live his life by those words.

In one sense, Mendeleev was lucky to have been born when he was. Virtually every great discovery and innovation has arisen from a combination of human insight and happy circumstance. Einstein was lucky to have begun his career shortly after the formulation of the modern theory of electromagnetism, which implied that the speed of light is constant, an idea that would become the essence of his theory of relativity. Steve Jobs was likewise lucky to have begun his career at a time when technology was just reaching the stage at which a useful personal computer could be developed. On the other hand, Armenian American inventor and businessman Luther Simjian held many patents, but he had his best idea just a decade or so too early: he conceived of the automated teller machine (ATM), which he called the Bankograph in 1960. He persuaded a New York City bank to install a few, but people did not trust them to accept deposits, so the only ones who used them were prostitutes and gamblers who didn’t want to deal with tellers face-to-face. A decade later, times had changed, and ATMs took off, but using someone else’s design.

Unlike Simjian, Mendeleev had the spirit of the times on his side. He reached adulthood at a moment when chemistry was ripe for advancement—the idea that the elements could be organized into families was in the air all over Europe in the 1860s. It hadn’t gone unnoticed, for example, that fluorine, chlorine, and bromine—classified as “halogens” by Swedish chemist Jöns Jakob Berzelius in 1842—seem to belong together: they are all extremely corrosive gases that become tamed when united with sodium, forming harmless saltlike crystals. (Table salt, for example, is sodium chloride.) Nor was it hard to detect the similarities among the alkali metals, like sodium, lithium, and potassium. These are all shiny, soft, and highly reactive. In fact, the members of the alkali metal family are so alike that if you swap potassium for sodium in table salt, what you get is close enough to sodium chloride that it is used as a salt substitute.

Chemists inspired by Carl Linnaeus’s scheme for classifying biological organisms sought to develop a comprehensive family system of their own to explain the relationships among the elements. But not all the groupings were obvious, nor was it known how they related to one another, or what property of atoms was responsible for the family resemblances. Those issues attracted thinkers all over Europe. Even a sugar refiner got into the act, or at least the house chemist at a sugar refinery. But though a handful of thinkers knocked on the door of the answer, just one man—Mendeleev—crashed right through it.

You’d think that if the idea of organizing the elements was “in the air,” then the person who succeeded at it would get a hearty cheer, but you wouldn’t necessarily conclude that that person would be considered one of the greatest geniuses ever to work in his field—which Mendeleev is. What puts him in the class with titans like Boyle, Dalton, and Lavoisier?

The “periodic table” that Mendeleev developed isn’t the chemist’s version of a field guide to the birds; rather, it is chemistry’s version of Newton’s laws, or at least it’s as close to that magical achievement as chemistry can hope to come. For it is not simply a table listing families of elements; it is a veritable Ouija board allowing chemists to understand and predict the properties of any element, even those yet unknown.

Looking back, it is easy to credit Mendeleev’s breakthrough to his asking the right question at the right time, and to his work ethic, passion, stubbornness, and extreme self-confidence. But as has often been the case in discovery and innovation—and in many of our own lives—just as important as his intellectual qualities was the role of chance, or at least an unrelated circumstance that set the stage for those qualities to achieve their triumph. In this case, it was Mendeleev’s chance decision to write a chemistry textbook.

← PreviousChemistry Vs Physics: Science Of Substance And Science Of Change
Next →Evolution Of Biology: Overcoming The God-centric Doctrine