The reach of the unconscious mind extends beyond control of our bodies. It shapes our lives in more profound ways. The next time you’re in a conversation, notice the way words spill out of your mouth more quickly than you could possibly consciously control every word you say. Your brain is working behind the scenes, crafting and producing language, conjugations, and complex thoughts for you. (For comparison, compare your speed when speaking a foreign language that you’re just learning!)

The same behind-the-scenes work is true of ideas. We take conscious credit for all our ideas, as though we’ve done the hard work in generating them. But in fact, your unconscious brain has been working on those ideas – consolidating memories, trying out new combinations, evaluating the consequences – for hours or months before the idea rises to your awareness and you declare, “I just thought of something!”

The man who first began to illuminate the hidden depths of the unconscious was one of the most influential scientists of the twentieth century. Sigmund Freud entered medical school in Vienna in 1873, and specialized in neurology. When he opened his private practice for the treatment of psychological disorders, he realized that often his patients had no conscious knowledge of what was driving their behavior. Freud’s insight was that much of their behavior was a product of unseen mental processes. This simple idea transformed psychiatry, ushering in a new way of understanding human drives and emotions.

Before Freud, aberrant mental processes went unexplained or were described in terms of demonic possession, weak will, and so on. Freud insisted on seeking the cause in the physical brain.

He had patients lie down on a couch in his office so that they didn’t have to look directly at him, and then he would get them to talk. In an era before brain scans, this was the best window into the world of the unconscious brain. His method was to gather information in patterns of behavior, in the content of dreams, in slips of the tongue, in mistakes of the pen. He observed like a detective, seeking clues to the unconscious neural machinery to which patients had no direct access.

He became convinced that the conscious mind is the tip of the iceberg of our mental processes, while the much larger part of what drives our thoughts and behaviors lies hidden from view. 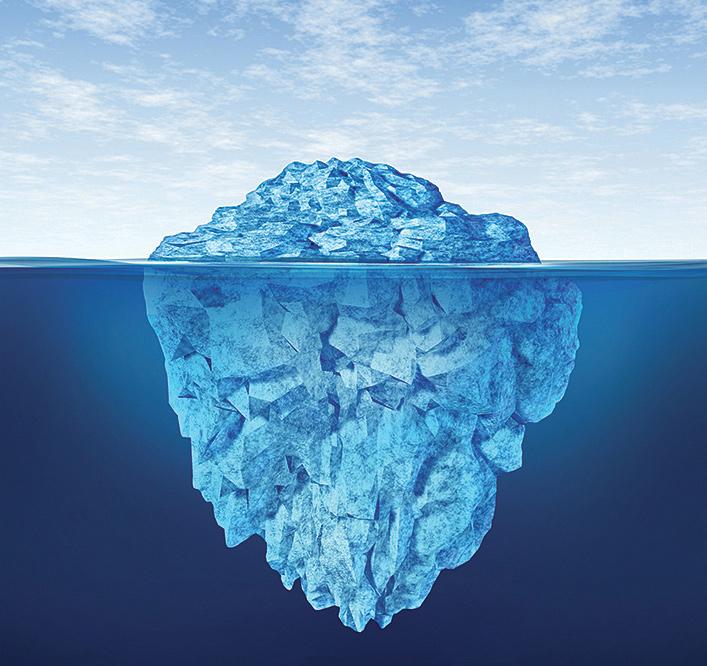 Freud suggested that the mind is like an iceberg, the majority of it hidden from our awareness.

Freud’s speculation turned out to be correct, and one consequence is that we don’t typically know the roots of our own choices. Our brains constantly pull information from the environment and use it to steer our behavior, but often the influences around us are not recognized. Take an effect called “priming”, in which one thing influences the perception of something else. For example, if you’re holding a warm drink you’ll describe your relationship with a family member more favorably; when you’re holding a cold drink, you’ll express a slightly poorer opinion of the relationship. Why does this happen? Because the brain mechanisms for judging intrapersonal warmth overlap with the mechanisms for judging physical warmth, and so one influences the other. The upshot is that your opinion about something as fundamental as your relationship with your mother can be manipulated by whether you take your tea hot or iced. Similarly, when you are in a foul-smelling environment, you’ll make harsher moral decisions – for example, you’re more likely to judge that someone else’s uncommon actions are immoral. In another study, it was shown that if you sit in a hard chair you’ll be a more hard-line negotiator in a business transaction; in a soft chair you’ll yield more.

← PreviousWhy Are We Conscious?
Next →How We Decide