Seeing feels so effortless that it’s hard to appreciate the effort the brain exerts to construct it. To lift the lid a little on the process, I flew to Irvine, California, to see what happens when my visual system doesn’t receive the signals it expects.

Dr. Alyssa Brewer at the University of California is interested in understanding how adaptable the brain is. To that end, she outfits participants with prism goggles that flip the left and right sides of the world – and she studies how the visual system copes with it.

On a beautiful spring day, I strapped on the prism goggles. The world flipped – objects on the right now appeared on my left, and vice versa. When trying to figure out where Alyssa was standing, my visual system told me one thing, while my hearing told me another. My senses weren’t matching up. When I reached out to grab an object, the sight of my own hand didn’t match the position claimed by my muscles. Two minutes into wearing the goggles, I was sweating and nauseated. 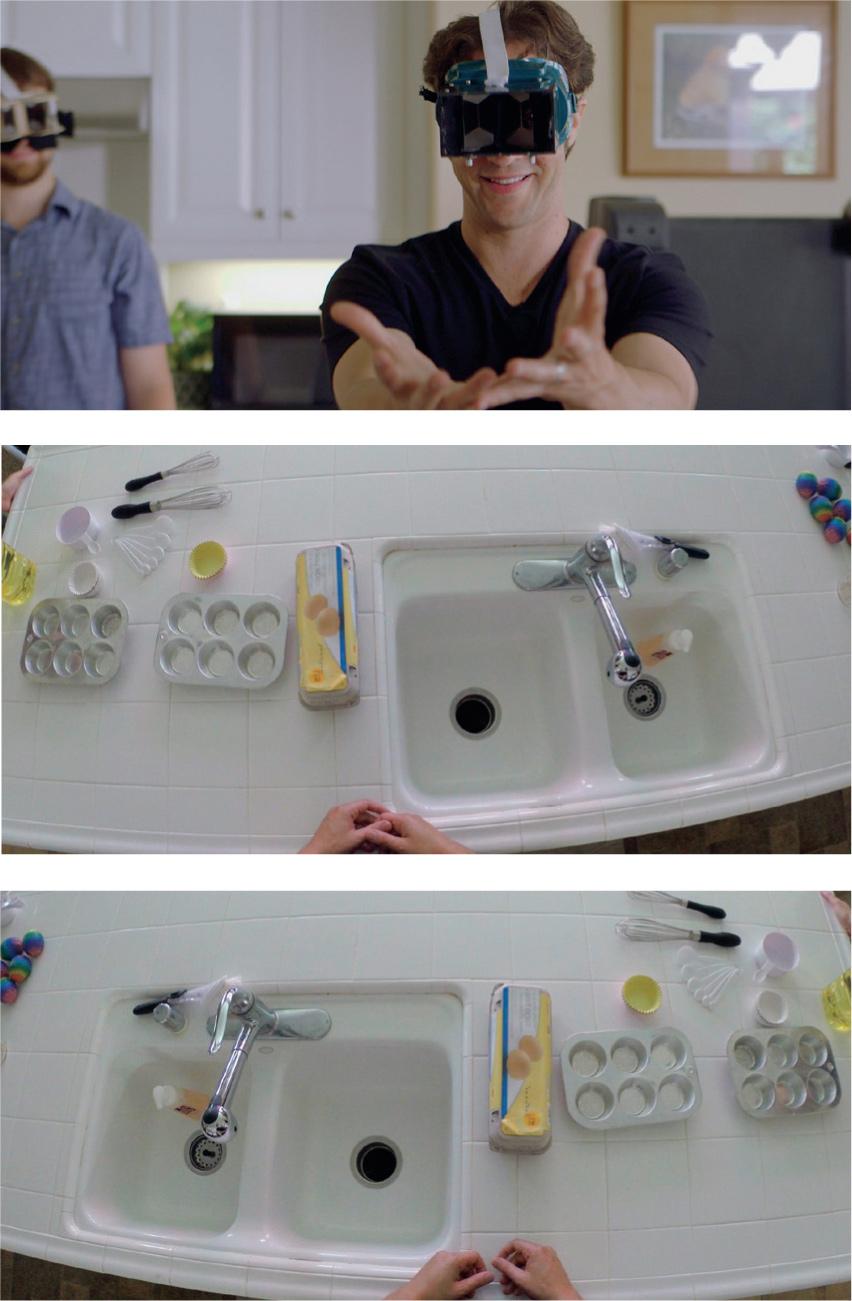 Prism goggles flip the visual world, making it inordinately difficult to perform simple tasks, such as pouring a drink, grabbing an object, or getting through a doorway without bumping into the frame.

Although my eyes were functioning and taking in the world, the visual data stream wasn’t consistent with my other data streams. This spelled hard work for my brain. It was like I was learning to see again for the first time.

I knew that wearing the goggles wouldn’t stay that difficult forever. Another participant, Brian Barton, was also wearing prism goggles – and he had been wearing them for a full week. Brian didn’t seem to be on the brink of vomiting, as I was. To compare our levels of adaptation, I challenged him to a baking competition. The contest would require us to break eggs into a bowl, stir in cupcake mix, pour the batter into cupcake trays, and put the trays in the oven.

It was no contest: Brian’s cupcakes came out of the oven looking normal, while most of my batter ended up dried onto the counter or baked in smears across the baking tray. Brian could navigate his world without much trouble, while I had been rendered inept. I had to struggle consciously through every move.

Wearing the goggles allowed me to experience the normally hidden effort behind visual processing. Earlier that morning, just before putting on the goggles, my brain could exploit its years of experience with the world. But after a simple reversal of one sensory input, it couldn’t any longer.

To progress to Brian’s level of proficiency, I knew I would need to continue interacting with the world for many days: reaching out to grab objects, following the direction of sounds, attending to the positions of my limbs. With enough practice, my brain would get trained up by a continual cross-referencing between the senses, just the way that Brian’s brain had been doing for seven days. With training, my neural networks would figure out how various data streams entering into the brain matched up with other data streams.

Brewer reports that after a few days of wearing the goggles, people develop an internal sense of a new left and an old left, and a new right and an old right. After a week, they can move around normally, the way Brian could, and they lose the concept of which right and left were the old ones and new ones. Their spatial map of the world alters. By two weeks into the task, they can write and read well, and they walk and reach with the proficiency of someone without goggles. In that short time span, they master the flipped input.

The brain doesn’t really care about the details of the input; it simply cares about figuring out how to most efficiently move around in the world and get what it needs. All the hard work of dealing with the low-level signals is taken care of for you. If you ever get a chance to wear prism goggles, you should. It exposes how much effort the brain goes through to make vision seem effortless.