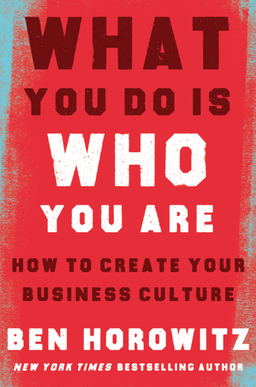 Mukris Notes: The next stitch is inspired by the Todd McKinnon who ran engineering at Salesforce and then co-founded Okta, a security identity system. This story from Ben Horowitz book “What You do is Who You are” talks about Todds decision to “risk the company” over “risking the culture”. Todd turned down Sony as a customer as he did not believe the company could deliver Sonys’ requirement. Instead of lying and getting the money, he decided not to sign up the account.

Ben Horowitz, a leading venture capitalist, modern management expert, and new York Times bestselling author, combines lessons both from history and modern Organisational practice with practical and often surprising advice to help executives build cultures that can weather both good and bad times. In what you do is who you are, Ben Horowitz, bestselling author of the hard thing about hard things, turns his attention to a question crucial to every organisation: how do you create and sustain the culture you want? What you do is who you are explains how to make your culture purposeful by Spotlighting four models of leadership and culture-building – The leader of the only successful slave revolt, haiti’s toussaint louverture; the Samurai, who ruled Japan for seven hundred years and shaped modern Japanese culture; Genghis Khan, who built the world’s largest empire; and shaka senghor, an American ex-con who created the most formidable prison gang in the Yard and ultimately transformed prison culture. What you do is who you are is a journey through culture, from ancient to modern. Along the way, it answers a question fundamental to any organisation: who are we?

Todd McKinnon, the CEO of Okta, got tested on his most important cultural tenet early in his tenure.

Prior to cofounding Okta in 2009, McKinnon was a vice president of engineering at Salesforce.com. Okta provided a secure identity system for companies that had moved their applications to the cloud. Hosting applications on the cloud was a new idea at the time, but having seen Salesforce explode, McKinnon felt that there would be many more such applications to come—marketing automation, legal apps, customer support, and so on. Cloud-based companies would then face the challenge of managing their employees’ activities across hundreds of systems they didn’t own. If you fire an employee, how can you be sure you’ve removed her from every system she had access to? This was the initial problem Okta sought to address.

Every customer would have to trust Okta to manage the credentials of all their employees across hundreds and perhaps thousands of systems. If Okta went down, even for maintenance, those employees wouldn’t be able to access their vital data. Even worse, if Okta got hacked, all their customers would also be hacked. As Okta had to be totally trusted to succeed, McKinnon had to make integrity the core of the culture.

But Okta was a startup. And the prime cultural virtue of any startup is survive at all costs. About three years in, Okta was struggling; it had missed seven forecasts in a row and needed to raise money. A potential large deal with Sony would make or break the quarter. The good news was that the deal was on track. The bad news was that Okta’s sales rep had promised Sony that a feature called on-premise user provisioning—which would allow Sony to put users into the system from within its own buildings—would be delivered in a few months. In fact, Okta didn’t plan to build it for a few years. Sony didn’t require contractual assurance that the feature was just around the corner, but it did want McKinnon’s word. Was the smart thing to do to tell Sony the truth, or was it to save the company? Was that feature so important to Sony that it had to be warned that it would be delivered a little late—even at the risk of layoffs at Okta, or worse?

“I knew that I could get the deal if I stretched the truth,” McKinnon recalled. “But I knew that everyone from the sales rep to the engineers would know that I had done that. They would assume that little lies were okay. I’d like to say it was an easy decision, but it was a hard decision. I ended up not taking the deal, because I knew it would be fatal in the long run. And maybe more than that because I did not want to lie.”

He chose to risk the company rather than risking the culture. In this case, it worked out. Khosla Ventures made a gutsy bet and funded Okta’s next round despite all those missed quarters. As of this writing, Okta is worth nearly $15 billion and has become the most important cloud-identity product in the world. Okta has still never been hacked and its uptime is legendary—it has gone as much as four years with no downtime.

But Todd’s decision could just as easily have finished the company. And then nobody would even remember Okta or the courage he showed.

Your employees will test you on your cultural virtues, either accidentally or on purpose, so before you put one into your company, ask yourself, “Am I willing to pass the test on this?”

← PreviousCategory Design vs Kidding
Next →Sony: The Market-Creating Machine