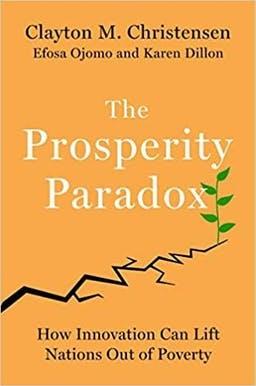 Mukris Notes: The reason why Okta was saved was getting venture fund at the right time. The next stitch takes us to Sony which never got venture money, struggled do pay salaries in its initial days yet turned out to be one of the most innovative company. This story from Clayton Christensen book “The Prosperity Paradox” has the perfect movie script on how Morita built and empire on his instincts and in the process fuelled Japans’ economy.

Global poverty is one of the world’s most vexing problems. For decades, we've assumed smart, well-intentioned people will eventually be able to change the economic trajectory of poor countries. From education to healthcare, infrastructure to eradicating corruption, too many solutions rely on trial and error. Essentially, the plan is often to identify areas that need help, flood them with resources and hope to see change over time. But hope is not an effective strategy. Clayton M. Christensen and his co-authors reveal a paradox at the heart of our approach to solving poverty. While noble, our current solutions are not producing consistent results and in some cases, have exacerbated the problem. At least twenty countries that have received billions of dollars’ worth of aid are poorer now. Applying the rigorous and theory-driven analysis he is known for, Christensen suggests a better way. The right kind of innovation not only builds companies—but also builds countries. The prosperity paradox identifies the limits of common economic development models, which tend to be top-down efforts and offers a new framework for economic growth based on entrepreneurship and market-creating innovation. Christensen, ojomo and Dillon use successful examples from American own economic development, including Ford, Eastman Kodak and singer sewing machines and shows how similar models have worked in other regions such as Japan, South Korea, Nigeria, Rwanda, India, Argentina and Mexico. The ideas in this book will help companies desperate for real, long-term growth see actual, sustainable progress where they're failed before. But the prosperity paradox is more than a business book; It is a call to action for anyone who wants a fresh take for making the world a better and more prosperous place.

Before Sony became Sony, when it was still Tokyo Tsushin Kogyo (TTK), the company might have deserved Dulles’s harsh words. It didn’t start out making world-class innovations that would wow the world. In fact, it would have been impossible to predict Sony’s trajectory from its humble beginnings. In the early years, TTK manufactured and sold electric heated cushions that often caught fire, “scorching blankets and futons.”3 The floors in the company’s manufacturing plants were peppered with potholes, and since the company could only afford buildings that had been damaged during the war, the exteriors also had cracks. This made for very interesting working conditions: whenever it rained, the factory floors were dotted with pools of water.

As was true for so many of the innovation pioneers in America in the previous century, the tale of Sony’s humble start-up years is filled with hardscrabble survival strategies, workarounds, and sheer ingenuity in the face of seemingly impossible survival odds. Sony had so few resources that the company couldn’t afford machinery and equipment, so engineers created their own. They made soldering irons, electrical coils, and even screwdrivers, often working into the early hours of the morning, sometimes being mistaken for thieves by the local police, as they tried to get in and out of the building at odd hours. Several times, Sony almost couldn’t make payroll. On one particular occasion, the company had to pay salaries in two installments, instead of the usual one.

None of that, however, stopped company founders Akio Morita and Masaru Ibuka, who instinctively did what large corporations, many of which were propped up by the government, found difficult to do—target nonconsumption and create new markets.

Many people would think of Sony’s major innovation triumph as the Walkman, which went on to sell over four hundred million units and created a worldwide culture of personal music devices. But it was actually a much humbler product that started Sony on its trajectory to the innovation powerhouse it is today: the G-type tape recorder, a portable magnetic reel-to-reel tape-recording device, what Morita called a “tape corder” at the time. “Before tape corders were invented, ‘recording’ was something very remote from our daily lives,” Morita would write in a 1950 book trying to explain the value of personal recording. “Previously it required special, complex technology and was very expensive. Now, however, with Sony’s new tape corder, recordings can be made quickly, cheaply and accurately by anyone anywhere anytime.”

Morita saw the enormous potential of helping customers record moments and memories of their own lives, not unlike Eastman’s photographs had done decades before. “It’s such a revolutionary product, the first of its kind in Japan. And it is so convenient. How could anyone resist buying it?” was how Akio Morita saw it. Yet people did resist. At least at first. People were fascinated by the portable recorders, but they weren’t selling like hotcakes, and Sony executives knew they had to do something different. After experiencing tepid sales for a while, Ibuka and Morita mobilized virtually all of the company’s engineers into sales roles. Sony learned through this process that, as Nobel laureate Ron Coase observed, markets don’t just appear or happen; “markets have to be created.”

To create this new market, the company had to build its own sales and distribution channels, and so in 1951, Sony established a subsidiary called the Tokyo Recording Company for this purpose, triggering the creation of a battery of local jobs (sales, distribution, advertising, training, service and support, and so on). Once, Ibuka asked the head of Tokyo Recording Company to go on a nationwide tour to demonstrate the product in schools. So many schools ended up putting in orders as a result of this tour that Sony couldn’t produce the recorders fast enough to meet the demand. Additionally, Ibuka redirected some of the company’s engineering effort to after-sales support in order to improve the customer experience. Sales flourished, and Sony learned never to underestimate either the effort required to create a new market or the potentially huge reward that comes with it.

Thankfully, Sony kept innovating, focused on creating new markets—first in Japan, and then for exports. In 1955, Sony introduced the world’s first battery-powered pocket transistor radio, a product that targeted the hundreds of millions of people for whom vacuum tube radios were too large and expensive. Although Sony’s battery-powered transistor radio was not as good in terms of sound quality compared to the vacuum tube radios on the market, it was small, inexpensive, and “good enough.” The customers Sony targeted—typically teenagers, few of whom could afford big vacuum tube radios—were very happy to listen to music with their friends in new places out of earshot of their parents.

I remember being thrilled to purchase and listen to my own transistor radio. For me, it represented progress, and, quite frankly, my alternative was no radio at all. Before the end of the 1950s, the battery-powered transistor radio market was worth hundreds of millions of dollars, with many other companies developing the product. The battery-powered transistor radio created jobs, generated profits for Sony, and provided Sony, and Japanese citizens, with more proof that they could innovate their way to prosperity. Sony would replicate this formula time and again, with market-creating innovations that initially took root in local markets before traveling around the world.

Between 1950 and 1982, Sony successfully built twelve different new markets. These included the original battery-powered pocket transistor radio, the first portable solid-state black-and-white television (by 1959, so many Japanese families owned a television that the royal wedding of the crown prince became a media spectacle, with a record fifteen million people watching it live on TV), videocassette players, portable video recorders, 3.5-inch floppy disk drives, and, of course, the now-famous Sony Walkman.

Sony cofounder Morita built an empire on his instinctive understanding of the opportunity found in struggle. The Walkman cassette player was actually temporarily put on hold when market research indicated that consumers would never buy a tape player that didn’t have the capacity to record and that customers would be irritated by the use of earphones. But Morita ignored his marketing department’s warning, trusting his own gut instead. Rather than relying on market research, he urged his team to “carefully watch how people live, get an intuitive sense as to what they might want, and then go with it.” Morita’s instincts were right: others shared in his struggle to make music portable. The Walkman found a ready market in Japan, where Sony executives initially thought they would sell roughly five thousand units a month. Instead, they sold more than fifty thousand in the first two months. All of a sudden, walking, running, reading, and writing while listening to music became possible. In forty years, Sony sold more than four hundred million units. The Walkman became one of the most successful portable consumer products to ever be released.

A market was born—and others were quick to jump in. With every new market Sony created, many other companies, including Toshiba, Panasonic, and several others, followed suit and capitalized on the opportunity. The Walkman helped other companies see that “mobile music” was possible. To be clear, a market does not revolve around any individual company—it revolves around creating new consumers and continually innovating and refining the understanding of their struggle and Job to Be Done. Sony later missed the boat on the MP3 and iPod, but the company had already planted the seeds for the industry to grow and flourish. What’s truly amazing is how many times Sony identified and created new markets that others then jumped into.

That’s in part because with each product Sony released—from the electric heated cushions to the Walkman—and each market the company created, Sony found a way to develop a profitable business model that targeted the struggles of average Japanese people. To be successful, Sony needed to create local jobs. With each job the company created, Sony was inadvertently helping rebuild Japan, and pulled in the resources necessary to develop it into a prosperous nation. When I come across a Sony product these days, I don’t just see a cool innovation, I see something much more powerful and enduring: the process by which one of the most prosperous nations in the world developed.

Even though there are other prominent consumer electronics companies today, Sony is still synonymous with Japanese innovation. From war-torn Japan, two friends with modest means and with no government support were able to build one of the world’s most recognizable companies by creating new markets that targeted nonconsumption. And that, of course, was just one of the innovation success stories that fueled Japan’s economic ascendancy. There were many more.

← PreviousTake Care of Cultural Virtues
Next →Sony: Pixar and Toyota