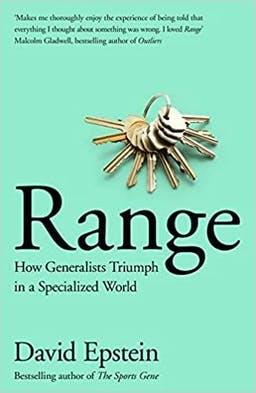 Mukris Notes: The next stitch takes inside the darker side of Nasa culture. This story from David Epstien book “Range” talks about how the cultural downside at Nasa using the similarity of disaster of its two missions of Challenger and Columbia. It also talks how some aspect of culture changed and the successful launch of “Gravity Probe B” whose mission was to validate Einstein’s general theory of relativity.

From the ‘10,000 hours rule’ to the power of Tiger parenting, we have been taught that success in any field requires early specialization and many hours of deliberate practice. And, worse, that if you dabble or delay, you'll never catch up with those who got a head start.

This is completely wrong.

In this landmark book, David Epstein shows you that the way to succeed is by sampling widely, gaining a breadth of experiences, taking detours, experimenting relentlessly, juggling many interests – in other words, by developing range.

Studying the world's most successful athletes, artists, musicians, inventors and scientists, Epstein demonstrates why in most fields – especially those that are complex and unpredictable – generalists, not specialists are primed to excel. No matter what you do, where you are in life, whether you are a teacher, student, scientist, business analyst, parent, job hunter, retiree, you will see the world differently after you've read Range. You'll understand better how we solve problems, how we learn and how we succeed. You'll see why failing a test is the best way to learn and why frequent quitters end up with the most fulfilling careers.

In 1974, William Lucas took over the Marshall Space Flight Center. A NASA chief historian wrote that Lucas was a brilliant engineer but “often grew angry when he learned of problems.” Allan McDonald described him to me as a “shoot-the-messenger type guy.” Lucas transformed von Braun’s Monday Notes into a system purely for upward communication. He did not write feedback and the notes did not circulate. At one point they morphed into standardized forms that had to be filled out. Monday Notes became one more rigid formality in a process culture. “Immediately, the quality of the notes fell,” wrote another official NASA historian.

Lucas retired shortly after the Challenger disaster, but the entrenched process culture persisted. NASA’s only other fatal shuttle accident, the space shuttle Columbia disintegration in 2003, was a cultural carbon copy of the Challenger. NASA clung to its usual process tools in an unusual circumstance. The Columbia disaster engendered an even stronger ill-fated congruence between process accountability and group-focused norms. Engineers grew concerned about a technical problem they did not fully understand, but they could not make a quantitative case. When they went to the Department of Defense to request high-resolution photographs of a part of the shuttle they thought was damaged, not only did NASA managers block outside assistance, but they apologized to DoD for contact outside “proper channels.” NASA administrators promised the violation of protocol would not happen again. The Columbia Accident Investigation Board concluded that NASA’s culture “emphasized chain of command, procedure, following the rules, and going by the book. While rules and procedures were essential for coordination, they had an unintended negative effect.” Once again, “allegiance to hierarchy and procedure” had ended in disaster. Again, lower ranking engineers had concerns they could not quantify; they stayed silent because “the requirement for data was stringent and inhibiting.”

The management and culture aspects of the Challenger and Columbia disasters were so eerily similar that the investigation board decreed that NASA was not functioning as “a learning organization.” In the absence of cultural cross-pressures, NASA had failed to learn, just like the subjects in Patil’s work who were placed in strongly congruent cultures.

There were, though, individuals in NASA who learned vital culture lessons, and when the time came, put them to use.

In the spring of 2003, just two months after NASA lost the space shuttle Columbia, it had to decide whether to scrap a high-profile project that had been forty years and three-quarters of a billion dollars in the making. Gravity Probe B was a technological marvel designed for a direct test of Einstein’s general theory of relativity. It would be launched into space to measure how Earth’s mass and rotation warped the fabric of space-time, like a bowling ball twirling in a vat of honey. GP-B had the distinction of being the longest-running project in the history of NASA. That was not a compliment.

It was conceived one year after the founding of NASA itself. The launch was delayed numerous times for technical problems, and the project was nearly cancelled on three separate occasions. There were staff members at NASA who no longer thought its mission was possible, and funding had to be rescued repeatedly by a Stanford physicist with a knack for lobbying Congress.

The technological challenges were immense. The probe required the roundest objects ever manufactured—quartz gyroscope rotors the size of ping-pong balls and so perfectly spherical that if you blew them up to the size of Earth, the highest mountain peak would be eight feet tall. The gyroscopes had to be cooled to −450°F by liquid helium, and the probe required surgically delicate thrusters for precise maneuvering. The technology took twenty years in development before it was ready for a test flight.

Congressional eyes were on NASA. The agency could not afford to launch the probe and have a high-profile failure right after Columbia. But if the Gravity Probe B launch had to be delayed once more, it could be the last time. “There was a huge amount of pressure to get this thing flown,” Rex Geveden, the GP-B program manager, told me. Unfortunately, engineers preparing for the prelaunch flight readiness review found a problem.

The power supply to an electronics box was interfering with a critical scientific instrument. Thankfully, the box only had to work at the beginning of the mission, to get the gyroscopes spinning. It could then be turned off, so it was not a catastrophic issue. But it was unexpected. If there were other flaws that prevented the box from spinning up the gyroscopes to start the experiment, the mission would be a total waste.

The giant Thermos-like container holding the gyroscopes had already been filled with liquid helium, cooled, and sealed for launch. If the box needed inspection, parts that had taken three months to install would have to come off the probe; a launch delay would cost $10–$20 million. Some engineers felt there was more risk in removing and potentially damaging parts than in leaving it all alone. Stanford University was the prime contractor, and the Stanford team leader “was confident that we could succeed,” he said, “so I pushed hard that we should go ahead and fly.” NASA’s chief engineer and head scientist for Gravity Probe B also both pushed to launch. Plus, the probe had been moved to Vandenberg Air Force Base in California for launch, and a delay would increase the chance of GP-B sitting there when an earthquake struck. So: race, or don’t race?

The decision was in Geveden’s hands. “My God, I can’t even express how stressful it was,” he told me. Even before the latest snafu, he had a hunch held lightly—he was uneasy about how the electronics box had been managed. But as long as the box was attached to the probe, there would be no more information forthcoming.

Geveden joined NASA in 1990, and was a keen observer of the culture. “When I was coming through NASA,” he said, “I had the intuition that there’s a real conformance culture.” Early in his tenure, he attended a team-building class offered by the agency. On the very first day the instructor asked the class, rhetorically, for the single most important principle in decision making. His answer: to get consensus. “And I said, ‘I don’t think the people who launched the space shuttle Challenger agree with that point,’” Geveden told me. “Consensus is nice to have, but we shouldn’t be optimizing happiness, we should be optimizing our decisions. I just had a feeling all along that there was something wrong with the culture. We didn’t have a healthy tension in the system.” NASA still had its hallowed process, and Geveden saw everywhere a collective culture that nudged conflict into darkened corners. “You almost couldn’t go into a meeting without someone saying, ‘Let’s take that offline,’” he recalled, just as Morton Thiokol had done for the infamous offline caucus.

Geveden, in his own way, was in favor of balancing the typical, formal process culture with a dose of informal individualism, as Kranz and von Braun once had. “The chain of communication has to be informal,” he told me, “completely different from the chain of command.” He wanted a culture where everyone had the responsibility to protest if something didn’t feel right. He decided to go prospecting for doubts.

He deeply respected Stanford’s electronics manager. The manager had worked with the same kind of power supply before, and viewed it as fragile technology. After a formal meeting in which NASA’s head engineer and its head scientist on the project both advocated for leaving the box in place, Geveden held informal individual meetings. In one of those, he learned from a member of the NASA team that a manager from Lockheed Martin, which had built the box, was concerned. Like Challenger’s O-rings, the known problem with the box was surmountable, but it was unexpected. There were unknown unknowns.

Against the recommendation of the chief engineer and the Stanford team leader, Geveden decided to scrub the launch and pull the box. Once it came off, engineers quickly discovered three other design problems that had not been clear in schematics, including a case of having used the flat-out wrong parts. The surprises prompted Lockheed to go back over every single circuit in the box. They found twenty separate issues.

As if Gravity Probe B was required by the space gods to scale every imaginable obstacle, a month after the box was pulled there was an earthquake near the launch site. The launch vehicle was slightly damaged, but fortunately the probe was intact. Four months later, in April 2004, GP-B finally took off. It was the first direct test to support Einstein’s idea that Earth drags the fabric of space-time around with it as it spins. The technology left a greater legacy. Components designed for Gravity Probe B improved digital cameras and satellites; the centimeter-accurate GPS was applied to automatic aircraft landing systems and precision farming.

The following year, a new NASA administrator was appointed by the president. The new administrator demanded the kind of individualism and opinionated debate that could serve as a cross-pressure for NASA’s robust process accountability. He made Geveden the associate administrator, essentially the COO of NASA, and the highest position in the agency that is not politically appointed.