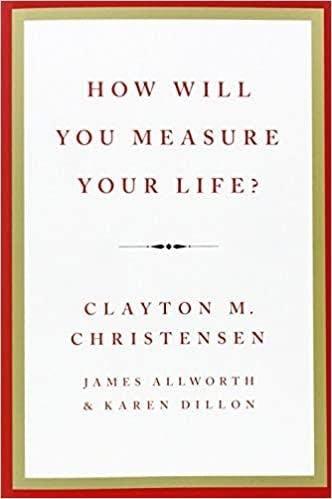 Mukris Notes: At this time, I was hoping the next stitch would lead us to Einstien and theory of relativity but the algorithm chose hiring over Einstein – yes Einstein came second to hiring. The next stitch is from the Clayton Christensens’ book “How will you measure your Life”. Clayton explains the McCall theory of hiring to build a great team. He talks about his failure while he was hiring for a key position for his company CPS technology and wished that he knew McCall hiring theory at that time. He also takes another example of Intel SAP joint venture for Pandesic which failed probably due to the same reason.

How Will You Measure Your Life was compiled from a speech given to students graduating from the Harvard Business School. Known for its pragmatic view to life, this book has been widely read by students in business schools, businessmen, corporate employees and by many others. The book deals with the basic questions in life, like how to be happy during the various phases life offers. The book shows a multi-faceted path to achieving the happiness that everyone craves for, from situations one faces and to the balance one needs to create in life.

The book deals with how to be successful and happy in one's career and how to maintain a well balanced family life and attain the happiness one seeks at home. It also talks about how to maintain a happy relationship with relatives and near and dear ones and how to maintain congenial relationships with colleagues and friends. It also tells readers how to make the best of business relationships. The books gives vivid answers to such questions, keeping in mind the philosophical and psychological aspects of these questions. The writings are useful to students moving out of business schools, who will face these questions as they step into their careers. It is useful for established professionals and homemakers too.

In 1979, writer Tom Wolfe captured the public imagination with his depiction of one of the most competitive professional environments in the world: the screening of American fighter pilots. To find out who should rise to the top, the pilots battled it out in an ever-increasing test of nerves, a kind of Darwinian gauntlet. Early NASA executives had decided this was how to identify who had been born with the “right stuff.” Those who thrived under the white-knuckle pressure of the program were deemed natural-born heroes.

Many companies looking to make top staffing decisions tend to replicate the same kind of thinking: that somehow there is a definitive way to identify the difference between the good and the great. In business, the “test” is what a résumé shows; you can tell by this whether a candidate is likely to thrive in a challenging new position. Underlying this is a belief that top candidates achieved what they did because of innate talent; that all these talents were qualities the candidate was born with, lying dormant, waiting to be used and honed. Recruiters search for those candidates who have gone from success to success to success, a kind of business version of the fighter-pilot tests. On paper, top candidates always seem to stand out. They have Wolfe’s term, “the right stuff.”

But if a candidate ever moved horizontally or had assignments that weren’t clear promotions, a lot of recruiters assume that person lacks the “right stuff”; it’s as if their company has indicated that they have reached the limits of their talent.

If finding the right stuff is a good way to identify top talent, why is it so common to see executives with a successful track record in one company coming into another company with great fanfare—only to be quickly dubbed a failure and ushered out? There is clearly something wrong here. The idea that some people have innate talents that just need to be identified has proved to be an unreliable predictor of success in business. Companies are using what would seem to be a logical list of criteria to screen their top candidates, but it’s the wrong list.

Several years ago, in a major executive education program for over a thousand senior leaders from a variety of companies, I asked by survey this question: “Of all of the people that you hired or promoted into positions of (defined) responsibility in your company since you’ve had your current responsibility, what percentage of them turned out to be a superb choice? What percentage is performing adequately? And what percentage turned out to have been the wrong person for the job they were hired or promoted to do?” By their own reckoning, about a third were superb choices; 40 percent were adequate choices; and about 25 percent turned out to be mistakes.

In other words, a typical manager gets it wrong a lot. They may strive for zero-defect quality in manufacturing or services, but a 25-percent “defect” rate in picking the right people—what many consider their most important responsibility—is somehow considered acceptable.

So if a “right stuff” screen doesn’t predict future success, what does? I spent a lot of time searching for and attempting to develop a theory that would help my students avoid such hiring mistakes in their future careers. In my hunt, I read book after book where the thinking had been reduced to generalities. They all wrote about the need to get “the right people in the right spots at the right time” and took examples of successful companies as the basis for “rules” of how to do this. Most of the books I read assumed the choices that one successful company had made would work for everyone. “If you hire the types of people that successful company XYZ Inc. did—then you will be successful, too.”

That’s a bad way to develop theory. In fact, it’s not theory at all. Most of these conclusions are based on anecdotes and hearsay.

It wasn’t until I came across work initially developed by Morgan McCall, a professor at the University of Southern California, in a book called High Flyers, that I finally found a theory that could help people make better decisions about whom to hire in their future. It explained why so many managers make hiring mistakes.

McCall has a very different view of the “right stuff.” While Wolfe’s fighter pilots may indeed have been the best of the best, McCall’s theory gives a causal explanation of why. It wasn’t because they were born with superior skills. Instead, it was because they had honed them along the way, by having experiences that taught them how to deal with setbacks or extreme stress in high-stakes situations.

The “right stuff” thinking lists skills that are correlated with success. It is, using the description of theory discussed earlier, looking to see whether job candidates have wings and feathers. McCall’s schools of experience model asks whether they have actually flown, and if so, in what circumstances. This model helps identify whether, in an earlier assignment, someone has actually wrestled with a problem similar to the one he will need to wrestle with now. In terms of the language of the capabilities from earlier, it is a search for process capabilities.

Unlike the “right stuff” model, McCall’s thinking is not based on the idea that great leaders are born ready to go. Rather, their abilities are developed and shaped by experiences in life. A challenging job, a failure in leading a project, an assignment in a new area of the company—all those things become “courses” in the school of experience. The skills that leaders have—or lack—depend heavily on which “courses,” so to speak, they have and have not taken along the way.