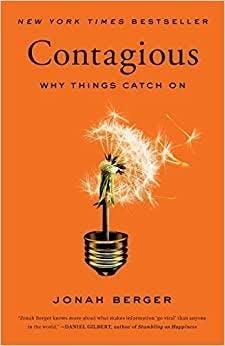 Mukris Notes: The next stitch will remind the reader of last year trade market story where share price of a company called Zoom Technologies (ticker ZOOM) went through the roof when many traders thought they were buying shares of Zoom Video Communications (ticker ZM). When NASA launched Pathfinder to explore Mars, the sales of a chocolate company Mars went up. This story from Jonah Berger book “Contagious” talks specifically about this story and how ideas catch on.

What makes things popular? If you said advertising, think again. People don’t listen to advertisements, they listen to their peers. But why do people talk about certain products and ideas more than others? Why are some stories and rumors more infectious? And what makes online content go viral?

Wharton marketing professor Jonah Berger has spent the last decade answering these questions. He’s studied why New York Times articles make the paper’s own Most E-mailed list, why products get word of mouth, and how social influence shapes everything from the cars we buy to the clothes we wear to the names we give our children.

In Contagious, Berger reveals the secret science behind word-of-mouth and social transmission. Discover how six basic principles drive all sorts of things to become contagious, from consumer products and policy initiatives to workplace rumors and YouTube videos. Learn how a luxury steakhouse found popularity through the lowly cheesesteak, why anti-drug commercials might have actually increased drug use, and why more than 200 million consumers shared a video about one of the most boring products there is: a blender.

Contagious provides specific, actionable techniques for helping information spread—for designing messages, advertisements, and content that people will share. Whether you’re a manager at a big company, a small business owner trying to boost awareness, a politician running for office, or a health official trying to get the word out, Contagious will show you how to make your product or idea catch on.

Why does it matter if particular thoughts or ideas are top of mind? Because accessible thoughts and ideas lead to action.

Back in mid-1997, the candy company Mars noticed an unexpected uptick in sales of its Mars bar. The company was surprised because it hadn’t changed its marketing in any way. It wasn’t spending additional money on advertising, it hadn’t changed its pricing, and it hadn’t run any special promotions. Yet sales had gone up. What had happened?

The mission was designed to collect samples of atmosphere, climate, and soil from a nearby planet. The undertaking took years of preparation and millions of dollars in funding. When the lander finally touched down on the alien landscape, the entire world was rapt, and all news outlets featured NASA’s triumph.

Mars bars are named after the company’s founder, Franklin Mars, not the planet. But the media attention the planet received acted as a trigger that reminded people of the candy and increased sales. Perhaps the makers of Sunny Delight should encourage NASA to explore the sun.

Music researchers Adrian North, David Hargreaves, and Jennifer McKendrick examined how triggers might affect supermarket buying behavior more broadly. You know the Muzak you’re used to hearing while you shop for groceries? Well, North, Hargreaves, and McKendrick subtly replaced it with music from different countries. Some days they played French music while other days they played German music—what you’d expect to hear outside a French café on the banks of the Seine and what you might expect to hear at Oktoberfest. Then they measured the type of wine people purchased.

Students were paid twenty dollars to report what they ate every day for breakfast, lunch, and dinner at their nearby dining hall. Monday: a bowl of Frosted Flakes cereal, two helpings of turkey lasagna with a side salad, and a pulled pork sandwich with spinach and fries. Tuesday: yogurt with fruit and walnuts, pepperoni pizza with Sprite, and shrimp pad thai.

Halfway through the two weeks we’d designated for the study, the students were asked to participate in what seemed like an unrelated experiment from a different researcher. They were asked to provide feedback on a public-health slogan targeting college students. Just to be sure they remembered the slogan, they were shown it more than twenty times, printed in different colors and fonts.

One group of students saw the slogan “Live the healthy way, eat five fruits and veggies a day.” Another group saw “Each and every dining-hall tray needs five fruits and veggies a day.” Both slogans encouraged people to eat fruits and vegetables, but the tray slogan did so using a trigger. The students lived on campus, and many of them ate in dining halls that used trays. So we wanted to see if we could trigger healthy eating behavior by using the dining room tray to remind students of the slogan.

Our students didn’t care for the tray slogan. They called it “corny” and rated it as less than half as attractive as the more generic “live healthy” slogan. Further, when asked whether the slogan would influence their own fruit and vegetable consumption, the students who had been shown the “tray” slogan were significantly more likely to say no.

But when it came to actual behavior, the effects were striking. Students who had been shown the more generic “live healthy” slogan didn’t change their eating habits. But students who had seen the “tray” slogan and used trays in their cafeterias markedly changed their behavior. The trays reminded them of the slogan and they ate 25 percent more fruits and vegetables as a result. The trigger worked.

We were pretty excited by the results. Getting college students to do anything—let alone eat more fruits and vegetables—is an impressive feat.

But when a colleague of ours heard about the study he wondered whether triggers would impact an even more consequential behavior: voting.