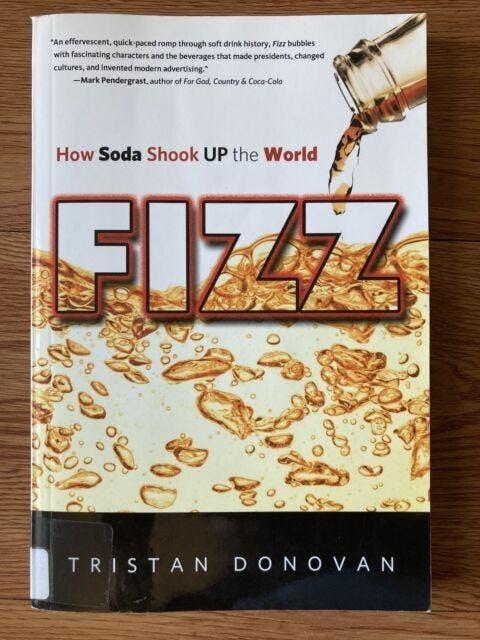 Mukris Notes: The interesting trivia in Johnson book is that Leal did not seek permission from government authorities to add Chlorine to Jersery city water. Taking “permission” as a cue, we move to another interesting liquid story and in this case, it Coke vs Pepsi war to be the first soda can to enter space. As crazy as it may sound, the two companies fought hard to be the first soda to enter the space. Coke was winning the race when just four days before the launch Pepsi got the permission to board the same Challenger space shuttle with Coke. This story comes from the book “How Soda Shook up the World” by Tristan Donovan.

The story of soda is the story of the modern world, a tale of glamorous bubbles, sparkling dreams, big bucks, miracle cures, and spreading waistlines. Fizz: How Soda Shook Up the World charts sodas’ remarkable, world-changing journey from awe-inspiring natural mystery to ubiquitous presence in all our lives.

Along the way you’ll meet the patent medicine peddlers who spawned some of the worlds’ biggest brands with their all-healing concoctions, as well as the grandees of science and medicine mesmerized by the magic of bubbling water. You’ll discover how fizzy pop cashed in on Prohibition, helped presidents reach the White House, and became public health enemy number one. You’ll learn how Pepsi put the fizz in Apples’ marketing, how Coca-Cola joined the space race, and how sodas’ sticky sweet allure defined and built nations. And you’ll find out how an alleged soda-loving snail rewrote the law books.

Fizz tells the extraordinary tale of how a seemingly simple everyday refreshment zinged and pinged over our taste buds and, in doing so, changed the world around us.

It was 1984, the height of the Cola War. Pepsi was riding high on the back of the Pepsi Challenge and an endorsement from Michael Jackson, the world’s biggest star. After more than 60 years of trying to beat Coca-Cola, victory was in sight. But the Atlanta soda giant still had a trick up its sleeve to use against its fast-growing Yankee rival: it would take soda into outer space.

Coca-Cola announced to the world that NASA would take its world-famous cola into orbit when the Challenger space shuttle blasted off from the Kennedy Space Center in Florida in July 1985. “As more people explore outer space, it was our judgment that it would be a darn shame if people on these long voyages wouldn’t have the opportunity to have a moment of refreshment with Coca-Cola,” Coke president Don Keough informed USA Today. After all, he could have added, when you’ve conquered the world, the only direction is up.

Coca-Cola spent a fortune on its space mission, assigning a team of its finest engineers to build a unique soda can capable of dispensing its fizzy nectar to astronauts as they floated in zero gravity. It had taken months to develop and been tested to destruction on high-altitude flights aboard NASA’s “Vomit Comet,” the Boeing KC-135 that the space agency would fly on a parabolic flight path so astronauts could train in a near weightless environment.

The tough steel can featured an adhesive fastener strip so that it could be attached to the spacecraft walls to stop it from floating around. It had a special paint that would not melt in intense heat or flake in extreme cold (in which case it could float off and damage the shuttle’s circuits). There was a safety lock to stop the liquid from escaping and a spout, activated by a plunger, from which Coca-Cola could be squirted down the throats of space travelers.

At the offices of Pepsi in Purchase, New York, the news that its archrival was to be first into space came as a shock. Bob McGarrah, the equipment development manager at Pepsi when Coca-Cola made its announcement, remembers the reaction: “What! Coke’s going to space and we’re not?” There might not have been moon bases or Martians out there to buy their fizzy drinks but this was the Cola War and the contest to be crowned soda king was on a knife edge. Pepsi couldn’t let Coca-Cola be the first into space. No way. If Coke was going where no soda had gone before, Pepsi was coming too.

Roger Enrico, the president of Pepsi-Cola, ordered his staff to gatecrash Coke’s orbital party. Pepsi got in touch with NASA and pointed out to the agency that “PepsiCo is strongly identified with the Republican Party and the support of President Reagan and his administration.” In short, put us on that shuttle or expect trouble in Washington. What could NASA say except “OK”?

Having gotten their ticket on the same shuttle flight as Coca-Cola, Pepsi now needed a space can of its own that could pass NASA’s rigorous tests. Pepsi assembled its best engineers and told them to make a space can. Fast. One of those on the team was McGarrah: “In something like 14 weeks, a really compressed period of time, we had to come up with a package that could go up in a spaceship. Everything that’s going to go onto that spaceship has to be tested for things like flammability, ability to withstand a vacuum, and on and on and on. You have to create the product and go through this elaborate testing process out in New Mexico to get approval.”

Working out of Pepsi’s research facility in Valhalla, New York, and with support from spray technology specialists Enviro-Spray, the team raced against the clock to build the kind of space-worthy can that Coca-Cola had spent months developing. “One of the team, Scott Gillesby, was the main courier to the testing facility and he would fly back and forth to the testing grounds in New Mexico,” McGarrah recalls. “He was literally in the air more than he was on the ground; flying out to the test site and back. He had to keep coming back and forth because a lot of the time the can failed.”

After several weeks of ferrying prototypes back and forth, Pepsi had their can. Essentially a repurposed aerosol canister, Pepsi’s steel space can contained small plastic pouches that would mix citric acid and sodium bicarbonate when the spray nozzle was pressed down. The acid and baking soda would react to produce carbon dioxide gas that would cause the pouches to expand, increasing the pressure inside the can and forcing the cola out through the nozzle. On July 8, 1985, with just four days to go before takeoff, NASA gave Pepsi permission to fly. Coke’s hopes of being the first soda in space were over. As takeoff approached, the seven astronauts found themselves besieged with questions from journalists wanting the scoop on the Cola Space War. “We’re not up there to run a taste test between the two,” exasperated astronaut Colonel Gordon Fullerton told reporters.

The orbital Pepsi Challenge didn’t take off quite as planned. At T minus 3 seconds the shuttle launch was canceled and delayed until July 29 when, finally, the world’s favorite sodas made the journey into space. Back on Earth, Pepsi marked the day with newspaper ads declaring the venture “one giant sip for mankind.” Once in space the astronauts tested out the cans, blowing wobbly spherical globules of zero-gravity cola around the ship before gulping them down. And when they returned to Earth the assembled press couldn’t wait to find out who had won the outer space taste test. Neither, replied the astronauts. The shuttle didn’t have a refrigerator, the crew explained, and warm soda just doesn’t cut it.

Even worse were the zero-gravity burps from drinking carbonated drinks in space. “On Earth, that’s not such a big deal, but in microgravity it’s just gross,” Vickie Kloeris, the food systems manager at NASA, reported on the space agency’s website in 2001. “Because there is no gravity, the contents of your stomach float and tend to stay at the top of your stomach, under the rib cage and close to the valve at the top of your stomach. Because this valve isn’t a complete closure (just a muscle that works with gravity), if you burp, it becomes a wet burp from the contents in your stomach.” Not that Pepsi cared. “Was Coke’s can better? Probably,” says McGarrah. “But Coke was there and we were there too.”

That either of them were there was more surprising. After all Coca-Cola and Pepsi were little more than fizzy flavored water at heart. Yet here they were traveling to space and back at the cost of millions for a publicity stunt that captivated a nation, saw the world’s leading space agency told it would have to deal with the Oval Office if it didn’t put Pepsi on the flight, and ended with astronauts complaining that their space cola wasn’t cold enough. That soda had become this important was somehow even more miraculous than the ability to send people into space.