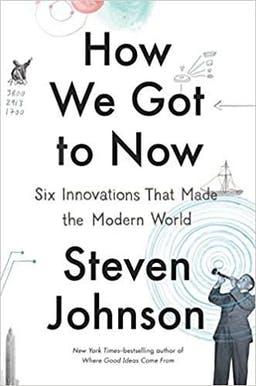 Mukris Notes: From Ridleys book, we jump to another classic from Steven Johnsons’ “How we Got to Now”. Johnson starts his argument on the similar subject of “Chlorination” from innovation in glass that led to the invention of lenses. Johnson eventually leads to Dr. Leal in New Jersey but if you read his version of Dr. Leals’ story, it would appear that Dr. Leal did this all independently and was never inspired by the set of events that Ridley mentions in his book.

In this illustrated history, Steven Johnson explores the history of innovation over centuries, tracing facets of modern life (refrigeration, clocks, and eyeglass lenses, to name a few) from their creation by hobbyists, amateurs, and entrepreneurs to their unintended historical consequences. Filled with surprising stories of accidental genius and brilliant mistakes—from the French publisher who invented the phonograph before Edison but forgot to include playback, to the Hollywood movie star who helped invent the technology behind Wi-Fi and Bluetooth—How We Got to Now investigates the secret history behind the everyday objects of contemporary life.

In his trademark style, Johnson examines unexpected connections between seemingly unrelated fields: how the invention of air-conditioning enabled the largest migration of human beings in the history of the species—to cities such as Dubai or Phoenix, which would otherwise be virtually uninhabitable; how pendulum clocks helped trigger the industrial revolution; and how clean water made it possible to manufacture computer chips. Accompanied by a major six-part television series on PBS, How We Got to Now is the story of collaborative networks building the modern world, written in the provocative, informative, and engaging style that has earned Johnson fans around the globe.

The modern synthesis that would come to replace the miasma hypothesis—that diseases such as cholera and typhoid are caused not by smells but by invisible organisms that thrive in contaminated water—was ultimately dependent, once again, on an innovation in glass. The German lens crafters Zeiss Optical Works began producing new microscopes in the early 1870s—devices that for the first time had been constructed around mathematical formulas that described the behavior of light. These new lenses enabled the microbiological work of scientists such as Robert Koch, one of the first scientists to identify the cholera bacterium. (After receiving the Nobel Prize for his work in 1905, Koch wrote to Carl Zeiss, “A large part of my success I owe to your excellent microscopes.”) With his great rival Louis Pasteur, Koch and his microscopes helped develop and evangelize the germ theory of disease. From a technological standpoint, the great nineteenth-century breakthrough in public health—the knowledge that invisible germs can kill—was a kind of team effort between maps and microscopes.

Today, Koch is rightly celebrated for the numerous microorganisms that he identified through those Zeiss lenses. But his research also led to a related breakthrough that was every bit as important, though less widely appreciated. Koch didn’t just see the bacteria; he also developed sophisticated tools to measure the density of bacteria in a given quantity of water. He mixed contaminated water with transparent gelatin, and viewed the growing bacterial colonies on a glass plate. Koch established a unit of measure that could be applied to any quantity of water—below 100 colonies per milliliter was considered to be safe to drink.

New ways of measuring create new ways of making. The ability to measure bacterial content allowed a completely new set of approaches to the challenges of public health. Before the adoption of these units of measurement, you had to test improvements to the water system the old-fashioned way: you built a new sewer or reservoir or pipe, and you sat around and waited to see if fewer people would die. But being able to take a sample of water and determine empirically whether it was free of contamination meant that cycles of experimentation could be tremendously accelerated.

Microscopes and measurement quickly opened a new front in the war on germs: instead of fighting them indirectly, by routing the waste away from the drinking water, new chemicals could be used to attack the germs directly. One of the key soldiers on this second front was a New Jersey doctor named John Leal. Like John Snow before him, Leal was a doctor who treated patients but who also had a passionate interest in wider issues of public health, particularly those concerning contaminated water supplies. It was an interest born of a personal tragedy: his father had suffered a slow and painful death from drinking bacteria-infested water during the Civil War. His father’s experience in the war gives us a compelling statistical portrait of the threat posed by contaminated water and other health risks during this period. Nineteen men in the 144th Regiment died in combat, while 178 died of disease during the war.

Leal experimented with many techniques for killing bacteria, but one poison in particular began to pique his interest as early as 1898: calcium hypochlorite, the potentially lethal chemical that is better known as chlorine, also known at the time as “chloride of lime.” The chemical had already been in wide circulation as a public health remedy: houses and neighborhoods that had suffered an outbreak of typhoid or cholera were routinely disinfected with the chemical, an intervention that did nothing to combat waterborne disease. But the idea of putting chlorine in water had not yet taken hold. The sharp, acrid smell of chloride of lime was indelibly associated with epidemic disease in the minds of city dwellers throughout the United States and Europe. It was certainly not a smell that one wanted to detect in one’s drinking water. Most doctors and public health authorities rejected the approach. One noted chemist protested: “The idea itself of chemical disinfection is repellent.” But armed with tools that enabled him to both see the pathogens behind diseases such as typhoid and dysentery and measure their overall presence in the water, Leal became convinced that chlorine—at the right dosage—could rid water of dangerous bacteria more effectively than any other means, without any threat to the humans drinking it.

Eventually, Leal landed a job with the Jersey City Water Supply Company, giving him oversight of seven billion gallons of drinking water in the Passaic River watershed. This new job set the stage for one of the most bizarre and daring interventions in the history of public health. In 1908, the company was immersed in a prolonged legal battle over contracts (worth hundreds of millions of dollars in today’s money) for reservoirs and water-supply pipes they had recently completed. The judge in the case had criticized the firm for not supplying waste that was “pure and wholesome” and ordered them to construct expensive additional sewer lines designed to keep pathogens out of the city’s drinking water. But Leal knew the sewer lines would be limited in their effectiveness, particularly during big storms. And so he decided to put his recent experiments with chlorine to the ultimate test.

In almost complete secrecy, without any permission from government authorities (and no notice to the general public), Leal decided to add chlorine to the Jersey City reservoirs. With the help of engineer George Warren Fuller, Leal built and installed a “chloride of lime feed facility” at the Boonton Reservoir outside Jersey City. It was a staggering risk, given the popular opposition to chemical filtering at the time. But the court rulings had severely limited his timeline, and he knew that lab tests would be meaningless to a lay audience. “Leal did not have time for a pilot study. He certainly did not have time to build a demonstration-scale facility to test the new technology,” Michael J. McGuire writes in his account, The Chlorine Revolution. “If the chlorine of lime feed system lost control of the amount of chemical being fed and a slug of high chlorine residual was delivered to Jersey City, Leal knew that would define the failure of the process.”

It was the first mass chlorination of a city’s water supply in history. Once word got out, however, it initially seemed as though Leal was a madman or some kind terrorist. Drinking a few glasses of calcium hypochlorite could kill you, after all. But Leal had done enough experiments to know that very small quantities of the compound were harmless to humans but lethal to many forms of bacteria.