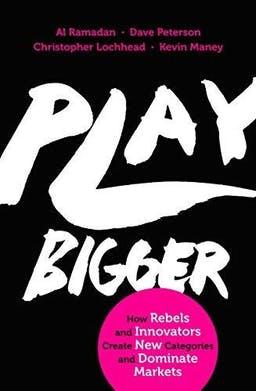 Mukris Notes: Taking SAP as the clue, the next stitch takes us to the book “Play Bigger” by Ramadan, Peterso, Lochhead and Maney. This book talks about how innovators create new categories and become the category king. This specific story talks about how SAP perceived to enter the cloud-based business while all it was doing was to use this as a mechanism to protect its old business. In the process Salesforce became a behemoth focusing on the enterprise cloud software.

Book Description from Amazon: Winning today isn’t about beating the competition at the old game. It’s about inventing a whole new game—defining a new market category, developing it and dominating it over time. You can’t build a legendary company without building a legendary category. If you think that having the best product is all it takes to win, you’re going to lose.

In this farsighted, pioneering guide, the founders of Silicon Valley advisory firm Play Bigger rely on data analysis and interviews to understand the inner workings of “category kings”— companies such as Amazon, Salesforce, Uber and IKEA that give us new ways of living, thinking or doing business, often solving problems we didn’t know we had.

In Play Bigger, the authors assemble their findings to introduce the new discipline of category design. By applying category design, companies can create new demand where none existed, conditioning customers’ brains so they change their expectations and buying habits. While this discipline defines the tech industry, it applies to every kind of industry and even to personal careers.

Crossing the Chasm revolutionized how we think about new products in an existing market. The Innovator’s Dilemma taught us about disrupting an aging market. Now, Play Bigger is transforming business once again, showing us how to create the market itself.

Salesforce CEO Marc Benioff in 2015 directly targeted SAP, sensing its weakness in enterprise cloud software. He told analysts “we are really targeting one company to beat, and that’s SAP.” Then he added: “The only innovation SAP has is in rhetoric. They should try writing some software.” Which, we admit, made us giggle. Yet behind Benioff’s attack lies a serious story about a reason big old corporations struggle to effectively create new categories. It happens when they convince themselves they’re doing category design when they’re actually not. We call this: kidding.

SAP was founded by five former IBM engineers in Germany in 1972. The company originally set out to develop payroll and accounting software for corporate mainframes. Over the next decade or so, SAP’s products evolved into software designed to coordinate all of a company’s processes, and SAP created the new category of enterprise resource planning (ERP) software. The company built the category with a powerful POV that accounting, manufacturing, and distribution applications should all work together in an integrated fashion. SAP made itself the king of ERP and grew into a tech giant, and for that we salute SAP’s early leadership. By the 1990s, a large swath of Fortune 500 companies ran their operations on SAP software installed on in-house data centers.

In the 2010s, SAP found itself staring at the same looming scenario that bedeviled Siebel: If a newcomer were to create a new category of cloud-based ERP that was simpler, easier to manage, more flexible, and less costly than SAP’s software, SAP would sink just like Siebel did. So some people inside SAP thought the company should try to get out ahead of this likely threat and create the category itself. Keep in mind, though, that SAP was deep into harvesting its established ERP software business, making big profits and pleasing investors with its steady-as-she-goes strategy. By its very nature, a cloud-based version of SAP’s ERP software would de-position SAP’s established business, which was generating all the profits from customers paying high-cost maintenance fees. It was a classic Innovator’s Dilemma problem: how can you cannibalize yourself, even when you know it’s the right thing to do?

To SAP’s credit, it started making moves toward cloud technology. In 2011, it bought SuccessFactors, a Silicon Valley company that offered cloud-based human resources management software. Around the same time, SAP assembled a unit called HANA, which offered a database management system in the cloud.

However, if SAP didn’t want to become Siebel, the whole company would’ve had to adopt a new POV built around cloud, and completely get behind the creation of a new category that would blow up its old category. It would’ve been a bet-the-company BHAG, not unlike IBM’s decision to make the 360 in the 1960s. But here’s what happened instead: because the company already had SuccessFactors and HANA and a few other fringe cloud plays, SAP’s senior leaders believed they were already designing a new cloud category. Yet they were really just protecting the old core business while dabbling around the edges with cloud. In short, when it came to defining and developing a new category, SAP wasn’t serious—it was kidding. Like the leadership of a lot of big old corporations, SAP’s team stayed focused on the business of harvesting while soothing its fears by investing a little in the future but not truly committing to it. They were kidding about creating a new category that would upend their old category. The same thing happened when newspapers set up websites in the 1990s but didn’t embrace the collapse of print, or when universities set up massive open online courses and believed that protected them from the forces of the Internet and cloud. SAP said it was transforming itself into a category king of cloud ERP, but it was kidding.

SAP isn’t alone. Gravity pulls hard at big old corporations. Category harvesting doesn’t mix easily with category creation. When most harvesters say they’re creating new categories, they are kidding. That’s not meant to be an insult—it’s the reality of running a big business owned by investors who have expectations of certain quarterly results.