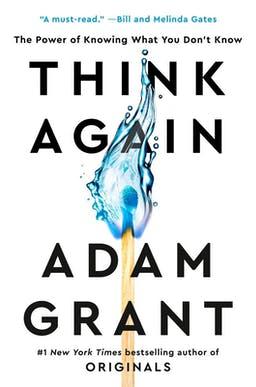 Mukris Notes: The last stitch continues with Pixar but this time as a movie making company and not hardware company. This story from the book “Think Again” by Adam Grant walks through the team that produced the movie “Incredibles”. One of the most technically complex movies was engineered by a team of “’Black Sheep” who were the biggest misfits at Pixar.

Intelligence is usually seen as the ability to think and learn, but in a rapidly changing world it might matter more that we can rethink and unlearn.

Organizational psychologist Adam Grant is an expert on opening other people's minds-and our own. As Wharton's top-rated professor and the bestselling author of Originals and Give and Take, he tries to argue like he's right but listen like he's wrong.

Think Again invites us to let go of views that are no longer serving us well and prize mental flexibility, humility, and curiosity over foolish consistency. If knowledge is power, knowing what we don't know is wisdom

In 2000, Pixar was on fire. Their teams had used computers to rethink animation in their first blockbuster, Toy Story, and they were fresh off two more smash hits. Yet the company’s founders weren’t content to rest on their laurels. They recruited an outside director named Brad Bird to shake things up. Brad had just released his debut film, which was well reviewed but flopped at the box office, so he was itching to do something big and bold. When he pitched his vision, the technical leadership at Pixar said it was impossible: they would need a decade and $500 million to make it.

Brad wasn’t ready to give up. He sought out the biggest misfits at Pixar for his project—people who were disagreeable, disgruntled, and dissatisfied. Some called them black sheep. Others called them pirates. When Brad rounded them up, he warned them that no one believed they could pull off the project. Just four years later, his team didn’t only succeed in releasing Pixar’s most complex film ever; they actually managed to lower the cost of production per minute. The Incredibles went on to gross upwards of $631 million worldwide and won the Oscar for Best Animated Feature.

Notice what Brad didn’t do. He didn’t stock his team with agreeable people. Agreeable people make for a great support network: they’re excited to encourage us and cheerlead for us. Rethinking depends on a different kind of network: a challenge network, a group of people we trust to point out our blind spots and help us overcome our weaknesses. Their role is to activate rethinking cycles by pushing us to be humble about our expertise, doubt our knowledge, and be curious about new perspectives.

The ideal members of a challenge network are disagreeable, because they’re fearless about questioning the way things have always been done and holding us accountable for thinking again. There’s evidence that disagreeable people speak up more frequently—especially when leaders aren’t receptive—and foster more task conflict. They’re like the doctor in the show House or the boss in the film The Devil Wears Prada. They give the critical feedback we might not want to hear, but need to hear.

Harnessing disagreeable people isn’t always easy. It helps if certain conditions are in place. Studies in oil drilling and tech companies suggest that dissatisfaction promotes creativity only when people feel committed and supported—and that cultural misfits are most likely to add value when they have strong bonds with their colleagues.

Before Brad Bird arrived, Pixar already had a track record of encouraging talented people to push boundaries. But the studio’s previous films had starred toys, bugs, and monsters, which were relatively simple to animate. Since making a whole film with lifelike human superheroes was beyond the capabilities of computer animation at the time, the technical teams balked at Brad’s vision for The Incredibles. That’s when he created his challenge network. He enlisted his band of pirates to foster task conflict and rethink the process.