Most of the spectacular and violent reactions in chemistry take place in the non-metals because they’re so greedy. As we’ve already seen, metals are big and have friendly, overlapping orbitals, but atoms on the right are small and grip their electrons tightly.

The most reactive element is fluorine, which we met in Chapter 1 when it was setting fire to water. A sparse yellow gas, fluorine needs to be transported in dense steel and bulletproof glass because it will rip the electrons out of anything else it touches.

Because it’s so electron-hungry, a molecule of two fluorine atoms will be perfectly symmetrical as the electrons are shared between them. If you bond it with a metal such as cesium, however, the bond is uneven, with fluorine getting the lion’s share of electron density. It’s similar to the way hydrochloric acid molecules are arranged—non-metals always win because they don’t like to share.

Ions are still sharing electrons but it’s such an uneven bond we usually just imagine cesium losing electrons and fluorine gaining them.

You’ll see diagrams of ionic bonds in which the particles are drawn like balls packed together, such as in the diagram on page 122 (top). That’s not strictly correct, but it helps keep track of where the ions are and how they’re arranged. The diagram at the bottom gives a slightly more accurate picture. 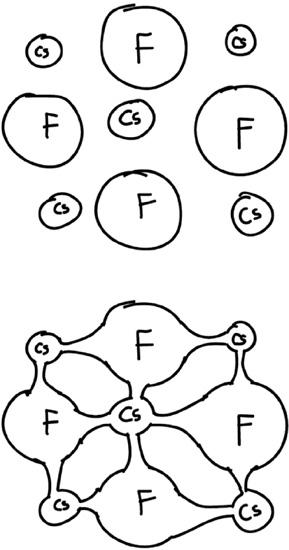 This type of bonding where things are arranged in a lattice framework gives rise to crystal properties. Starting at group 13 with boron, non-metals tend to keep their electrons in very specific places, forming grids with sharp edges. This brings us to …