This is how the fireworks and spectroscopy we’ve already mentioned work. Every atom has a unique orbital arrangement so every atom emits or absorbs a unique light spectrum. When the electrons start jumping from orbital to orbital, the distance they jump determines what kind of light gets emitted or absorbed depending on which way they’re traveling.

The question everyone usually asks at this point is why electrons absorb or emit light in the first place. I’m afraid the answer is because that’s just the way nature is. It’s just one of the fundamental laws that were established during the big-bang expansion. The same way balls roll downhill as they obey the laws of gravity, electrons release and absorb light as they obey the laws of quantum mechanics.

We’ve talked about some beams of light having more ability to promote electrons than others, and in science we sometimes replace the word ability with the word energy. I’ve mostly avoided using it up until now because it’s a word fraught with difficulty and misconception.

In the context of quantum chemistry, energy means “how capable a beam of light is to push an electron into a higher orbital.” You’ll sometimes hear scientists say that electrons in outer orbitals have “absorbed energy” and that this energy gets released when they drop. This is convenient shorthand but we have to be clear: it is light that gets absorbed and emitted. Light has the ability to promote electrons and therefore possesses energy, but energy is not an actual thing.

The opposite of ability is what we mean by “stability” and it’s a measure of how much energy an electron has lost when it drops down, or how reluctant it is to shift upward from its present orbital.

An electron from an inner orbital, close to the nucleus, is less willing to change because it is happy where it is. We describe it as being chemically “stable.” An electron in a higher orbital with a lot of energy (ability to release light) is very unstable, however, because it is not happy and will change given the chance.

The diagram below shows what happens when an electron absorbs a beam of light. It jumps from a low-energy orbital to a high-energy orbital, becoming unstable. 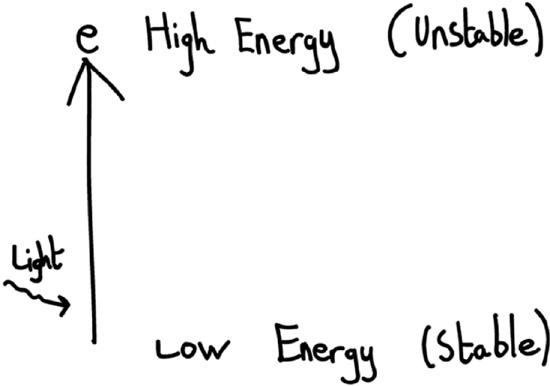 The next diagram shows the reverse process. This is a high-energy electron dropping down to a more stable orbital. The only difference is that light is being emitted here rather than absorbed. 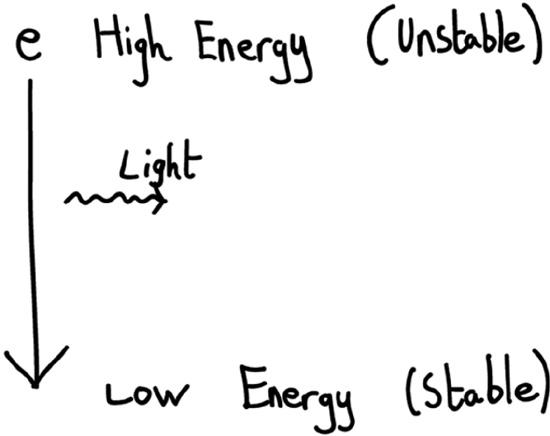